Claims by liquidators or administrators

Francis Wilks & Jones has been successfully defending directors from administrator and liquidator claims since 2002. Often the situation is not as bleak as it might first seem. Our expert advice has saved hundreds of directors from millions of pounds of personal claims. Let us help you too.

“FWJ were very hands-on, getting involved from an early stage in seeking to avert an expensive set of litigation proceedings. I am more than happy to recommend their services, particularly when it comes to considering complicated issues or complex proceedings.

A client who was facing a liquidator claim for the improper withdrawal of sums from a company. We had the claim dismissed

Common types of claims made by liquidators or administrators

The following are the types of claims we commonly defend directors against:

Directors loans drawn, whether authorised or not, have to be repaid where the company is placed into insolvency.

A dividend can only be paid by a company where there are sufficient distributable reserves, usually a reference to the company’s profit and loss reserve. Even if your company has made a profit this year, the losses from last year may make it impossible to declare a dividend.

There are also numerous other requirements for a dividend to be validly approved and drawn and our expert team led by lawyer and accountant Stephen Downie, is brilliantly placed to help defend these claims.

There are defences available to directors and shareholders, including by reference to the advice received, the documents reviewed and the impact of paying back an earlier dividend on ones drawn later.

Where a company has gone into liquidation a claim can be brought against a director to make a contribution to the company’s assets if at some time before the start of the winding up they knew or ought to have known as a reasonably diligent person that there was no reasonable prospect that the company would avoid going into insolvent liquidation.

A defence to wrongful trading claims is available to directors where they can show that they took every reasonable step with a view to minimising the potential loss to the company’s creditors.

Fraudulent trading is a criminal offence and has greater consequences than wrongful trading. Given the higher criminal burden of proof, it is far more difficult to prove. The key difference is the intent of the director. Fraudulent trading occurs when any business of the company is carried on with intent to defraud creditors of the company, creditors of any other person or for any fraudulent purpose.

A director found to have committed such an offence can be held liable to make contributions to the company’s assets usually based on the loss suffered by the fraudulent trading. There are defences to fraudulent trading claims we can help you with.

The main fiduciary duties include to act within the powers conferred by the company’s Memorandum and Articles of Association, to promote the success of the company, to exercise independent judgment, to exercise reasonable care, skill and diligence, to avoid conflicts of interest, not to accept benefits from third parties and to declare interest in proposed transaction or arrangement

There are a number of defences available to directors and we successfully help many directors defend these types of cases.

There are a complex array of statutory and common law hurdles for such a claim to be successful, in the absence of which the preference claim will not succeed. However, if the claim is successful, then the payment, interest and costs will be repayable against the individual or company preferred.

2. Transactions at an undervalue

Where pre-insolvency an asset of the company is transferred or sold, of payments made, for less than the market value of the asset or for nothing, then the loss to the company (and its creditors) as a result is recoverable in a similar way to a preference claim.

This claim is often based on the claim for transactions undertaken to avoid future and potential creditors, and is not subject to any time limit. We successfully defend many directors on these types of claims.

This can arise where the company is party to a credit transaction with unfair or unfavourable terms, such as the requirement to pay grossly inflated interest payments which would otherwise be unfair. It will also apply if the company was in a vulnerable position at the time of the transaction. These claims can be hard for a liquidator or administrator to run and we can help defend them for you.

A liquidator or administrator may declare a floating charge as invalid and seek to have it set aside where the purpose of the charge was to secure old debt and it was granted within certain defined time-periods prior to the company’s insolvency and the company was insolvent at the time or became insolvent as a result of granting the charge.

6. Liability of past directors

This situation applies where the company is being wound up and it has made a payment out of capital to redeem or purchase any its own shares and the company does not have sufficient assets to repay its debts or liabilities and the expenses of the winding up. If this happens, the director who authorised the transaction may be held labile to contribute personally to the company’s assets to the value of the payment made by the company.

Once a company is in liquidation, any disposition of that company’s property is void if it was made after the commencement of winding up. The liquidator can pursue the recipient for repayment of property transferred, including any directors who have received assets or money from the company during that time.

If it can be shown the disposition is beneficial or did not prejudice the interests of the other unsecured creditors, it can be possible to obtain sanction from a court which can be obtained retrospectively.

“I was impressed with the quality of the service provided and with how easily accessible and approachable the team was. FWJ’s help meant that I was able to safeguard the jobs of my staff and ensure that my customers had uninterrupted access to services in what was an incredibly difficult time for me. I wish I had instructed them earlier. I cannot recommend them highly enough.”

At Francis Wilks & Jones, we regularly advise on claims against directors, aiming to provide a quality, value-added service where litigation is only a route to an exit of least harm and where our fees are outweighed by the benefit provided to you. Should you require any assistance, please contact our director services team. Or speak to Partner Stephen Downie or Maria Koureas-Jones for immediate help today.

our client, the former director of property development company that had gone into liquidation, needed assistance following a liquidator’s claim for the repayment of...

Liquidators were seeking to attach a personal liability to the former director of a tax advisory company which had been placed into insolvency. Our... 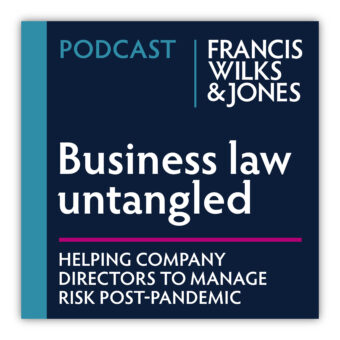 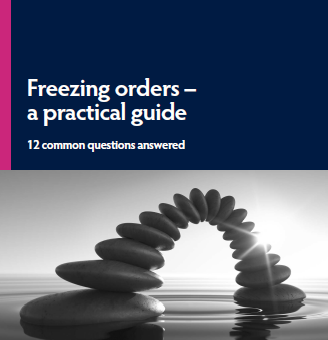